We often use discrete mathematics to model a population when time is modelled in discrete steps. This fits well with annual censuses of wildlife populations.

Sometimes populations are themselves discrete, such as:

The population equation, $N_{t+1}=\lambda N_t$ , from before means that over discrete intervals of time,$t_0, t_1, t_2, ...$, the rate of change in population size is proportional to the size of the population.

Question:  If a population of owls increases by 40% in a year, what is the value of r and $\lambda$ ?

Given there were initially 10 owls, what will the population size be in 75 days?  Can you plot this population growth?

Some populations may grow continuously, without pulsed births and deaths (eg. humans). In these cases, time is a continuous smooth curve, so we use differential equations to represent this continuous model.

Different values of r determine the change in population size, as shown below. 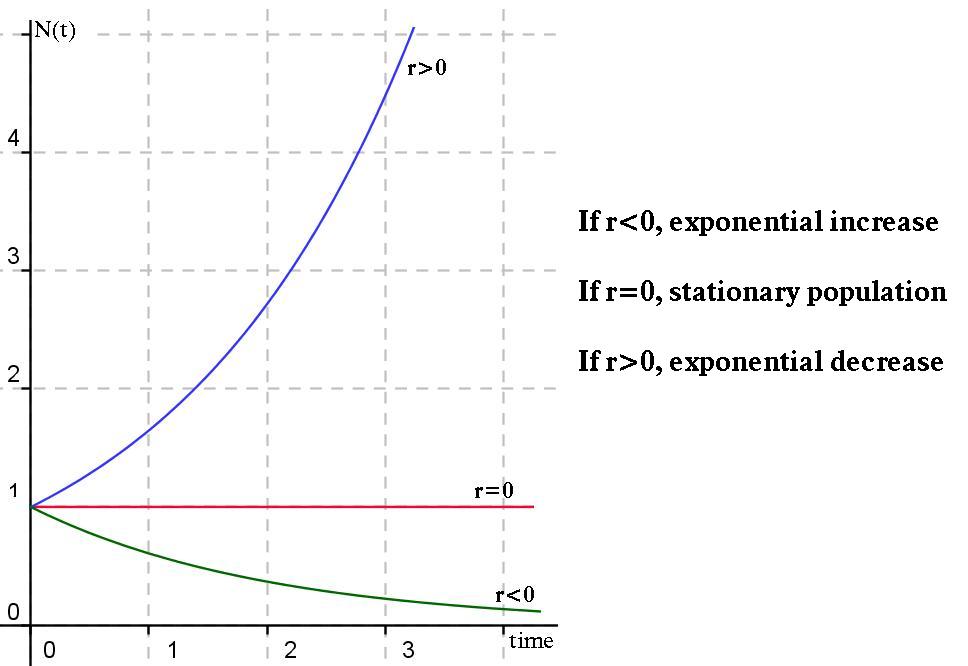 Limitations of the Models

Consider a population of insects which suddenly dies out right before the start of every time period, and whose children hatch right after. A discrete model would lead us to believe that there are no insects during the entire period, so instead we should use a continuous model.

On the other hand, it is often impossible to continually monitor the population size, so we approximate using the discrete case.

Choosing which of discrete or continuous to use is an important decision in modelling populations.

Can you also think of any assumptions we have made with these models, and why they could be a problem? Consider the environment the population inhabits and differences between members of the population.

Click here to see the geometric model adapted to include environmental resistance.

Question:  If $\lambda = 1.25$, by how much does a population of blue footed boobies increase per year?