A Venn diagram is a way of representing all possible logical relationships between a collection of sets. 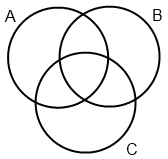 Create a Venn diagram for 4 sets $A$, $B$, $C$ and $D$. Make sure that your diagram contains regions for all possible intersections and you might like to experiment to create a particularly pleasing diagram.

Venn diagrams are useful in many problems in logic, probability, computer science and set theory. As well as a useful tool, they are an area of study in themselves and much research has gone into the creation of particularly beautiful or symmetric Venn diagrams for larger numbers of sets.
The NRICH Project aims to enrich the mathematical experiences of all learners. To support this aim, members of the NRICH team work in a wide range of capacities, including providing professional development for teachers wishing to embed rich mathematical tasks into everyday classroom practice.