If you have access to a set of equilateral triangles which fit together, such as Polydron, you may wish to make some of the models discussed while reading this article. If you have not met the Platonic and Archimedean solids before, start by reading the article Classifying Solids using Angle Deficiency, which provided the inspiration for Edward's ideas discussed here.

I constructed solids which consisted of identical, regular faces where the number of faces meeting at a vertex was a characteristic of that vertex, and each face had to have the same pattern of 'vertex numbers' around its vertices. 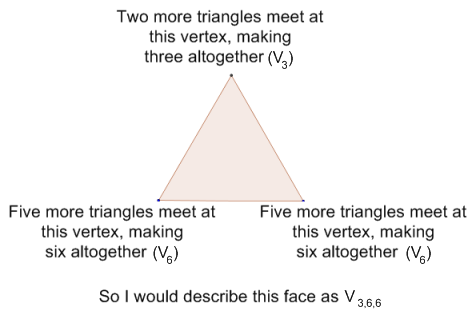 I assembled the triangles in such a way that the pattern for every face was $V_{3,6,6}$.
This resulted in a peculiar shape with 12 faces, 18 edges, and 8 vertices. It looked like four tetrahedra stuck to the faces of a fifth. 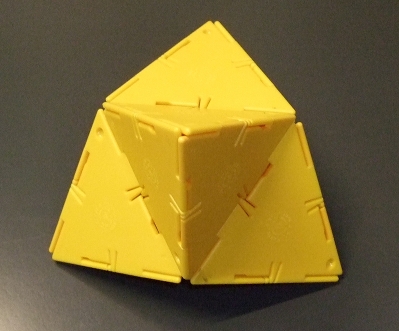 Can you work out from the picture of the solid which vertices are $V_3$ and which are $V_6$? See the notes for the solution, and labelled vertices for other pictures in this article. Perhaps you could try making Edward's $V_{3,6,6}$ solid for yourself.

The $V_6$ vertices of the solid were not flat, as might be expected because six equilateral triangles can meet at a point to form a tessellation of the plane. Instead they folded around the vertex. The solid is concave and cannot rest on any face; only two edges at a time may rest on a plane.

From my analysis of the model I made, I think it has the same set of symmetries as the tetrahedron, being essentially a tetrahedron with each face replaced by another tetrahedron.

I then produced two more shapes with triangular faces, which I described as $V_{5,4,4}$ and $V_{3,4,4}$. Both of these consisted of two identical pyramids joined at their bases (pentagonal pyramids and tetrahedra respectively), and were convex. These were not so interesting as the first shape I made. 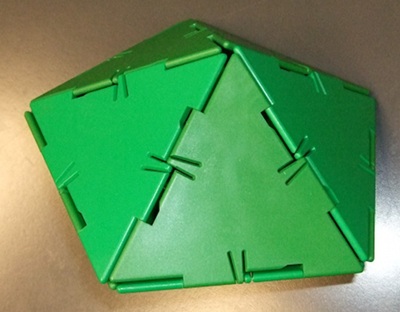 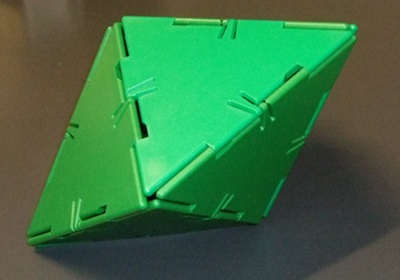 
I then tried some other configurations, such as $V_{3,5,5}$ and quickly found that, for triangular faces, if you have an odd vertex number and the other two numbers are not equal to each other, the solid cannot be constructed. If I start with 5 triangles meeting at a point so that each has a $V_5$ vertex, this creates a pentagon. As each face already has one $V_5$ vertex, the remaining two vertices on each face must be one $V_3$ and one $V_5$, so around the pentagon I must alternate between $V_3$ and $V_5$ vertices. But as 5 is an odd number I cannot match the pattern when I get back to the beginning - I am forced to have either two $V_3$ or two $V_5$ vertices together. The same argument can apply to any odd vertex number, as alternating around an n-gon when n is odd will always result in two adjacent vertices needing to be the same.

I then tried to construct $V_{4,6,6}$. This produced a shape with 24 faces, 36 edges, and 14 vertices. It consists of a cube with each face replaced by a square pyramid; it is another concave figure, which seems to have the same symmetries as the cube from which it is formed. The angle deficiency comes from the six $V_4$ vertices (as the $V_6$ vertices have zero angle deficiency), each being deficient by $120^\circ$, so the total angle deficiency is $6\times 120^\circ = 720^\circ$. 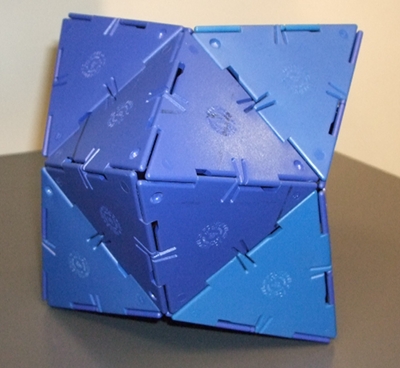 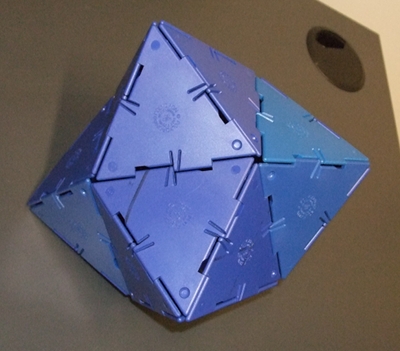 
I attempted also to construct $V_{5,6,6}$; this should have produced a figure formed from a dodecahedron with faces replaced by pentagonal pyramids, but I found it very difficult to physically construct. It might be easier to produce a computer model.

After further thought, it occurred to me that it was possible to replace the faces of any Platonic solid with pyramids, which meant that figures based on the octahedron and icosahedron could also be constructed. These would have configurations of $V_{3,8,8}$ and $V_{3,10,10}$ respectively, and would in each case share the symmetries of their 'parent' solid. Constructing $V_{3,8,8}$ produced the Stellated Octahedron (also called the Stella Octangula). 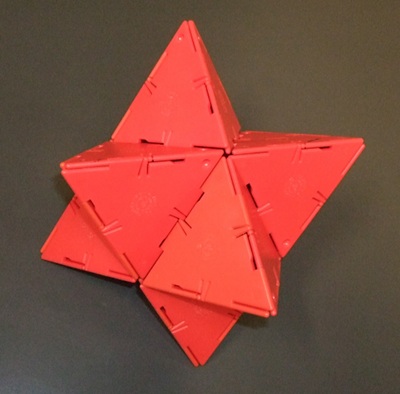 
I believe that the vertex number configuration uniquely specifies the solid, so if you are given $V_{a,b,c}$ and lots of triangles, there is at most one solid you can make for a given set of values $a,b$ and $c$. I also think that the rule that all faces should have the same pattern of vertices around them is sufficient to ensure 'face-transitivity', by which I mean any face can be mapped onto any other by some symmetry of the solid. The Platonic solids are the convex solids which satisfy this rule as well as the rule for the Archimedean solids that all vertices should have the same pattern of faces around them.

Having created solids by replacing the faces of Platonic solids with pyramids, I attempted to construct a solid from one of the Archimedean solids in the same way. I found that for each type of face on the original solid, there is a type of face on the new solid. For example, if we take the cuboctahedron and replace its triangular faces with tetrahedra and its square faces with square pyramids (using equilateral triangles), the faces which produce the tetrahedra will be $V_{3,8,8}$ and the faces which produce the square pyramids will be $V_{4,8,8}$, so it breaks my rule about every face having the same vertex numbers around it, so is not one of my face-transitive solids. However, the shape retains the symmetry of the cuboctahedron. 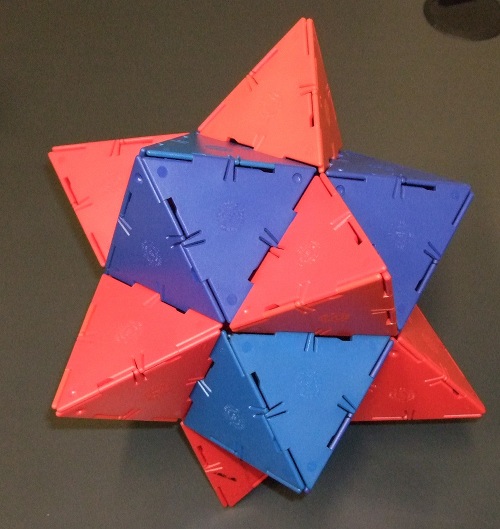 
I began to investigate the solids formed from other regular faces besides triangles. I tried to construct $V_{3,3,3,4,4}$ from pentagons, and found that it produces an infinite tunnel of dodecahedra: 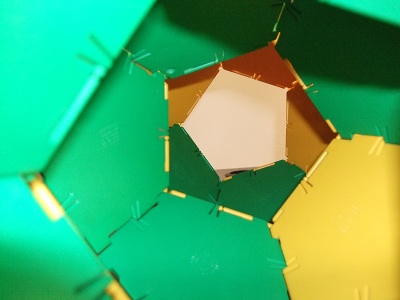 There is no obvious upper limit on the polygons that can be used, nor on how large the vertex numbers may become, since a nonconvex vertex may have a negative angle deficiency.

Edward is about to embark on a degree in Mathematics at the University of Cambridge.
The NRICH Project aims to enrich the mathematical experiences of all learners. To support this aim, members of the NRICH team work in a wide range of capacities, including providing professional development for teachers wishing to embed rich mathematical tasks into everyday classroom practice.