During 2008-2009 Sharon Walter was one of four NRICH Teacher Fellows who worked on embedding NRICH materials into their teaching. At the time Sharon was the second in Faculty at Crown Hills Community College which is an inner city state secondary school in Leicester. In September 2008 Sharon became the Head of Mathematics at Crown Hills.

In this article, Sharon talks about her experiences.


Are NRICH problems only for the most able students?

I used the NRICH problems with a Year 8 class, set 3 of 4, who had targets of level 5 or above at the end of KS3. I found that the important thing was to select the problems carefully. At the lower end of KS3 problems labelled as Stage 2 on the site may be more suitable than Stage 3 problems.


How did you use the problems?

I used the problems in a variety of ways, sometimes as starters, sometimes as whole lesson activities and occasionally as a basis for a set of lessons.


How did you choose which problems to use?

I used the curriculum mapping documents extensively, as well as the Topic Search. They both led me to appropriate problems for the mathematical topic I was covering. I never looked at the problems of the month.

How did you make the problems accessible to your students? 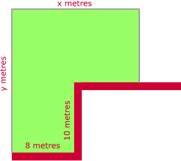 The first large scale problem I used with the class was Fence It .

In order to introduce it to the students I printed off the problem and created a whiteboard flipchart which helped me structure the start of the lesson. It included a guide about the steps we needed to take to gather data. I also prepared a table for results that we began to fill in as we worked through.
This scaffolding meant that every student had a starting point and was not left behind.

Did the students become engaged immediately?

No. It took a while for the students to get really involved in the problem. I had initially planned it for just one 50 minute lesson but at the end of the lesson the students were only just starting to get engaged. I had to seriously weigh up the options of either leaving the problem incomplete or spending another lesson on it. The easy option would have been to leave it and move on. I decided to continue, and half way through the second lesson realised that I had a class of actively engaged students who were all working on the problem and who had also begun to work collaboratively. They were checking each other's working and attempting to improve upon it.


At the end of the lesson I asked each student to write about how they had felt about the problem at the beginning of the first lesson and how they felt about it at the end of the second lesson. I also asked the Teaching Assistant to note down her views. This was extremely impromptu, and only involved giving each student a blank piece of paper, but it produced some really interesting feedback. It reinforced my feelings that the students had found it difficult at the start but a significant number had worked through the process and come out at the end with a feeling of satisfaction.

So can you just choose a problem from the website and use it with a class immediately?

Not quite, most of the NRICH problems are open ended investigations where there may be a variety of solutions. Their main benefits are that they require the application of a variety of mathematical processes. To use them in the classroom you have to be a facilitator to the problem-solving process providing nudges, hints and guidance as appropriate, but being prepared for the problem to take you in a totally unexpected direction. The problems may be solved more quickly than expected or take a lot longer. This requires you to be flexible in your lesson planning which can be intimidating if you are used to sticking to fairly rigid plans.

What have been the benefits of using the NRICH problems?

Solving a challenging problem that required a significant amount of time and energy gave a much greater feeling of satisfaction to the students than solving a large number of superficial problems. In my class the engagement of the boys increased but I must admit that the engagement of some of the girls decreased. It seemed to fire up the competitive nature of the boys but some of the girls seemed intimidated by the lack of structure. All of the students seemed to benefit from the discussion with each other.

If you do not think you have enough time to fit in problem solving...

As the curriculum changes and functional skills and the key processes of mathematics are further embedded, problem solving and application of maths should be integral to your scheme of work. Looking at the NRICH problems now and trying out a few with your classes will benefit your teaching and your students' learning; but it will not be an overnight 'quick fix'. Changing the culture of the classroom to one where the process is more important than the answer is a difficult and arduous process and, although without doubt there will be long term benefits, there will also be times when you want to give up. Knowing that it will have benefits is the only way to make sure that you do not give up at the first hurdle.

How can you help others use the resources?

Always discuss what you are doing with others. You may think that what you are doing is very obvious while for another colleague it may be totally groundbreaking. Try to have some time in meetings where you do maths together and share problems and successes. Working with someone else can give you a totally different perspective on a problem that you may have viewed as inappropriate or uninteresting. Talking could reveal a totally new slant, as the teachers of Leicester City found out during their workshop on the NRICH problems.

What will I do in the future?

I would like to look at the different ways to use the problems and evaluate them. Using more group work and concentrating on the way that they present their findings I feel would be beneficial to all students as learners of mathematics. I would like them to focus on the processes they are using rather than just the final answer.

[Readers may also be interested in other similar articles about teachers using NRICH]
The NRICH Project aims to enrich the mathematical experiences of all learners. To support this aim, members of the NRICH team work in a wide range of capacities, including providing professional development for teachers wishing to embed rich mathematical tasks into everyday classroom practice.