Two Heads Are Better Than One

When I was at school and, in fact, when I started teaching, maths was a subject which was expected to be done in silence. Talking about it was considered 'cheating'. Thus, almost exam conditions were expected in every lesson. This was not, I think, conducive of sound learning. Today, many teachers, especially primary teachers, aim for that wonderful sound of 'Classroom buzz', of learners on subject, discussing the task in hand.

There are many ways of communicating, some more exact and useful in mathematical learning than others. The smell of toast and coffee, the touch on an arm, the sound of a familiar piece of music or the pattering of rain all communicate about the world around us. But those which are most mathematical - that communicate the most in mathematics - are symbols, diagrams and language.

Some years ago P. Ziff wrote "What is said is slippery stuff."* It is sometimes difficult to catch the meaning and the implications when we first meet a new idea or definition. One picture, we have heard many times, is worth a thousand words. This was certainly true when, long ago, confronted with a question in geometry which began something like: "ABC is a triangle. AB is produced to D, and CF is parallel to AD and ......... A picture, or rather ready-made diagram, would have been most useful! However, a few questions from a teacher such as, "Why have you drawn a right-angled triangle" or "Why have you stopped this line here" would lead to a successful outcome.

It is words that mediate and explain and it is talk and its place in mathematical learning that is the real subject of this article. I have in mind two ten year-olds, heads bent over a mathematical problem, sharing their thoughts, trying out their ideas, jotting down figures. This is communication at its most human, most educational, and for the teacher, the most exciting. It is why many stay in teaching, despite everything. These two girls from a Year $4$ class are discussing a calculator problem. 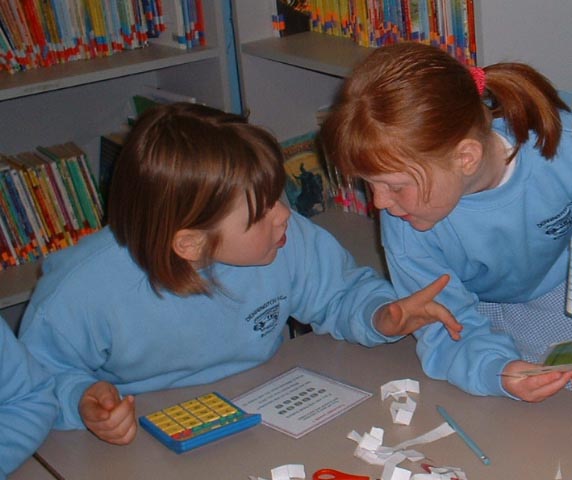 Mathematical language is strange and special and is only learnt slowly. You only have to think of the difference in meaning of the word 'solution' to a chemist and a mathematician to see how muddling it can be for young learners. Other words, such as 'reflex', 'similar', 'mean', 'volume' and 'prime' have very different meanings in maths than they do in the wide world. Children beginning school and those who are progressing through the educational system need to learn not only the language of mathematics, but also the language for learning mathematics. It is important that in the mathematics classroom language is not a kind of Gobbledygook but a path to understanding.

I have heard teachers (and others) say that they only feel that they truly understood something when they have explained it carefully to someone else. It seems that sometimes it can be the teachers who learn most because it is the teachers who sort out their thoughts, by refining their language and expressing it in words comprehensible to the learner. So let's create situations for young children and students where they can work together on a mathematical task that requires them to explain and justify what they are doing.

Most people can remember experiences when problems, not necessarily mathematical, have been sorted out with two or three minds on the task in a way that none of them could have done on their own. This situation can be recreated when learners work together.

I can recall a situation, many years ago now, in a railway carriage. A young child, aged about eighteen months, was standing by the seat with a small bucket of cube bricks. He was tipping them out on the seat and then putting them back into the bucket, individually, one by one. Someone sitting opposite said, "You'd almost believe he was counting them."

The one by one action was a prerequisite for counting but the language had not yet been learnt. I believe similar situations, in a much more complicated form, take place throughout our education, and in fact, our whole lives. The language, and progressively the more specialist language, is necessary for learning, and even more, understanding mathematics.

There are, to my mind, two very different sorts of learning. There is the behaviourist type of learning, conditioning, in which rats learn to run round mazes and children learn number facts such as multiplication tables, 'by heart'. If you say : "Six sevens", I, and many others, will answer "forty-two" without thinking. I am conditioned to say this. But if I think of all the interesting things I can about $42$, especially if I do this whilst discussing it with someone else who can add their thoughts, I may gain new insights and real understanding about numbers and number patterns. No wonder the answer to the "The Ultimate Question'"is 42! **

There other kind of learning I think of as 'real' learning, closely allied to understanding and language. As learners grow older and more adept at mathematics, more and more language takes place silently in their heads. Some of this is recalling of facts, some searching round for a possible solution and some true reflection. Reflecting is very different from daydreaming and vaguely wondering, although it can, at times, all too easily descend to this level. Reflecting is, in a way, communicating with yourself. I believe it is more efficiently done if communication with others has taken place earlier.

**Arthur Dent. The Hitchhiker's Guide to the Galaxy There are some amazing facts about the number 42 and this reference in general. Try this .
The NRICH Project aims to enrich the mathematical experiences of all learners. To support this aim, members of the NRICH team work in a wide range of capacities, including providing professional development for teachers wishing to embed rich mathematical tasks into everyday classroom practice.