Here is a simple map showing the positions of 5 cities: 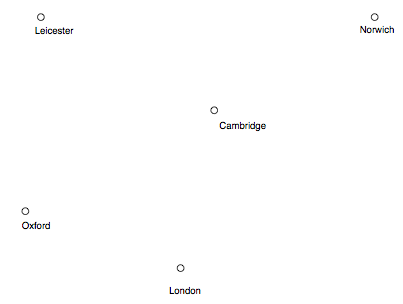 We could be making some car journeys between these towns and so here is a chart giving us some information about distances and times.

These numbers show us direct routes. But now, suppose we go on journeys involving three or four cities.

What other journeys involving three or four cities can you find?
When you have some of these answer these questions:

1. What is the total distance of your journey in kilometres?
2. How many minutes long is your journey?
3. How much longer (in terms of time) is the journey when passing through another city or other cities along the way compared with the direct journey between the starting city and the final destination?

This problem may be used to introduce pupils to handling more complicated data and gives them the opportunity to calculate using distance and time.

It would be nice to have a map of the UK to start off this problem (or for pairs of children to have an atlas or road map) and ask pupils to locate the cities in question. You can then draw attention to the simplified map in the problem. To encourage learners to engage with the information in the table, you could ask a few starter questions, such as "how far is the journey from Oxford to London?" and "what journeys could you make in under 3 hours?".


This problem lends itself to being tackled in groups, for example of three or four pupils. Ask each group to try to answer the questions and as they are working, look out for those groups who are communicating well and perhaps those who divide the task amongst themselves. You might like to ask groups who have organised their approach well to share their strategies with everyone else. The main point of this activity is for children to be immersed in the data so that they begin to use it confidently.


You might like to have a whole-class discussion about the ambiguity of "long" in this context. Does it mean distance-wise or time-wise? Does it matter?

What other journeys could you make, for example, starting at Norwich and ending at Oxford?
How are you going to keep track of which routes you have found?
What pieces of information do you think would be good to find in order to work out the total distance and total time taken?
What would you like to look at first in trying to get an answer?

You could encourage the pupils to create their own questions based on the information given.

In addition to talking more with those children who are finding the task challenging, it might be appropriate to simplify the problem by fixing the starting and finishing cities. It would also be useful to have calculators available.
The NRICH Project aims to enrich the mathematical experiences of all learners. To support this aim, members of the NRICH team work in a wide range of capacities, including providing professional development for teachers wishing to embed rich mathematical tasks into everyday classroom practice.