A cannon ball is shot vertically upwards with speed v. How fast would the ball need to go such that it would never fall back to Earth?

How fast would you need to fire the cannon ball to escape from the moon, Jupiter or the surface of the sun? Before you try these parts of the calculation, do you think that these escape velocities will be lower or higher than that of Earth in each case? To get a feel for the relative sizes, you can look at this scale picture*. 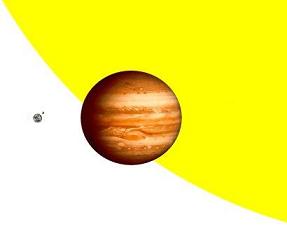 Suppose that I go to planet Tiny, which is the same mass as Earth but a lot smaller. I fire a cannon ball again at 50% of the speed of light. How small would planet Tiny need to be so that the cannon ball cannot escape to infinity?

Supposing now that I go to planet Heavy, which is the same size as Earth but a lot more dense, and fire my cannon ball up at 50% of the speed of light. How many times more dense than Earth would planet Heavy need to be so that the cannon ball cannot escape its gravity?


Compare these results to trying to escape from a typical Neutron star which would weigh around twice the mass of the sun and have a radius of only 10km (this is around the same density as trying to squeeze the entire earth into a ball of 100m radius).

This problem introduces the concept of Escape Velocity . Whilst escape velocity is a real concept, attempting to reach such speeds in the atmosphere would cause immediate disintegration of almost any object. It was noted in the 1700s by Laplace that for a very massive body the escape velocity would approach the speed of light. This concept was developed in the 1920s following Einstein's discovery of general relativity. The black hole was discovered as a concept: an object so dense that even light beams would not be able to escape its gravitational pull. Over the last couple of decades evidence for the real existence of black holes in the galaxy has grown.