Moira is late for school. What is the shortest route she can take from the school gates to the entrance?

How many different journeys could you make if you were going to visit four stations in this network? How about if there were five stations? Can you predict the number of journeys for seven stations?

How many loops of string have been used to make these patterns?


Here we have a train line that has different routes from Appleby to each of the main stations of Barkton, Cheston and Dorby, because there are two crossing-over lines passing through Barkton and Cheston.
The smaller stations at Yanbridge, Zogborough, Worsby, Xanly, Underton and Vilham just have a single track running through them: 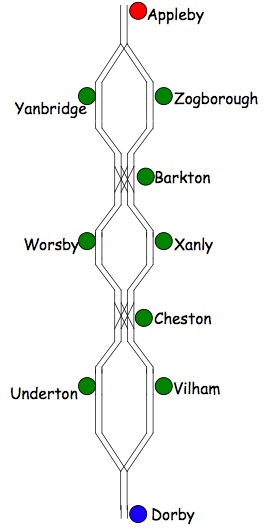 One of the main reasons for this challenge is to find ways of approaching such a problem. When introducing it to the class, it would be good to put the problem into a context, perhaps by talking first about local journeys. You could ask the children if they have ever seen maps of train/bus/tram/underground routes drawn in stations or on the walls of the vehicles themselves. It would be good to discuss how the maps are "models" for the routes taken - they are simply a way to put the routes on paper to make it easy to understand.

You could then show your pupils the route in the problem and ask a few questions about it so that you are sure they understand the way it is drawn. For example, if I came from Appleby, what station would the train stop at after Barkton? (This could be Worsby or Xanly.) You might like to begin the first part of the problem as a whole class, asking them how they will know when they have all the different routes. How will they record the routes that they find? This is a good opportunity to model having a system. Your class might suggest several routes from Appleby to Cheston, and you could pair them up so that the two which both visit Yanbridge, for example, are together. In this way, even if this time they have not found them systematically in the first place, the children can see how they can develop a system next time.

Children might like to try the investigation Simple Train Journeys after having a go at this problem, which uses similar ideas but in a more open context.
The NRICH Project aims to enrich the mathematical experiences of all learners. To support this aim, members of the NRICH team work in a wide range of capacities, including providing professional development for teachers wishing to embed rich mathematical tasks into everyday classroom practice.