This article follows on from Shaping the Universe I - Planet Earth.

Astronomers have been trying to work out what the universe looks like for thousands of years. Here are some of the ways that people have tried to visualise the solar system, using mathematics and geometrical models.

Aristotle, Ptolemy and other Greek astronomers thought that the Sun, the Moon and each of the planets were set in hollow crystal spheres that were invisible but made of solid matter. These were nested one inside the other, like the layers of an onion, with the Earth at the centre. The stars were fixed into the biggest crystal sphere of them all which surrounded everything else. The celestial bodies were thought to rotate within these spheres, while the Earth always remained still. Why do you think people believed so strongly that the Earth wasn't moving? Doesn't it seem more absurd to believe that we are hurtling through space at an incredible speed? Perhaps you can understand why it took thousands of years for astronomers to figure out what was going on and to convince people that the earth is not stationary!


Western civilisations believed in this model for over a thousand years. Lots of slightly different models of the solar system were suggested by other astronomers, like this one from 1660 which still has the earth at the centre but looks quite different to Ptolemy's model. It may seem hard to believe, but this beautiful picture was based on centuries of observational data and astronomical measurements, and was meant to truly represent the cosmos we live in. The artistic embellishments were typical of maps like this because the heavens were so closely associated with symbolism and beauty as well as the people who observed them. The astronomer Tycho Brahe appears in this picture. Can you spot him? (Hint - he's the rather grandly dressed gentleman.) 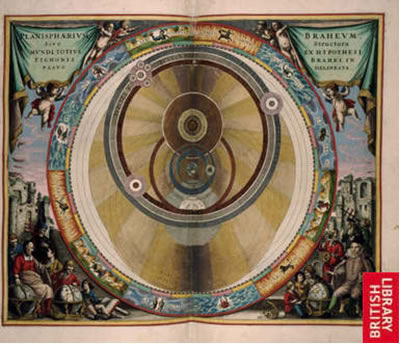 Tycho Brahe's map of the planets, as painted by Andreas Cellarius Palatinus in his Atlas Coelestis seu Harmonica Macrocosmica. Image courtesy of the British Library.
.
The spherical model persisted for a very long time, although the order of the spheres changed when it was determined that the earth and the other planets actually revolve around the Sun. Nicolaus Copernicus was the most influential astronomer to argue for this 'heliocentric' system in the 16th century. Although he didn't have any experimental evidence for his theories, he made significant advances towards what we now know to be the correct model of the solar system. He even got the planets in the right order, but he still retained spherical orbits and other features of the old Ptolemaic system. Even so, most people at the time weren't convinced by his arguments and continued to place the earth at the centre of the universe. The church in particular had reasons for rejecting his theory, as they argued that mankind was special and therefore must have been created at the centre of everything. Even when Galileo discovered some objects in the universe that don't revolve around the earth - the moons of Jupiter - it still took a very long time for people to accept that the earth is just another planet and is not so special after all.

As well as drawing maps of the solar system, people have been making 3-dimensional models of it for centuries. These are thought to have originated in antiquity, but few survive from before the 16th century. Many of these models were for educational purposes, or just impressive ornaments, but they were also used by astronomers to help them visualise the universe and make calculations. Two of the most elegant ways of modelling the planets and their orbits were using armillary spheres, and grand orreries. Here are some examples of these, and you can find out more about instruments like these at the website of the Whipple Museum of the History of Science, Cambridge . 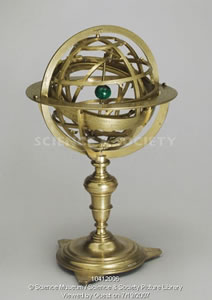 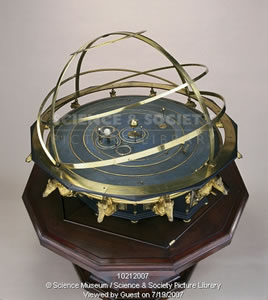 Left: an armillary sphere made in 1648 showing the earth at the centre of the planetary spheres.
Right: a grand orrery built in 1733.
Images courtesy of the Science Museum, Science and Society Picture Library.


In 1596 Kepler built an elaborate model to see if there was any geometric reason for the ratios of the distances between the planets. At that time there were six known planets, and Kepler decided to see what would happen if he took the five Platonic solids and put them one inside the other, with one sphere in the middle and one surrounding each shape. He thought that perhaps this arrangement would give exactly the right ratio of distances for the six planetary spheres. It was a nice idea, but it didn't work out! 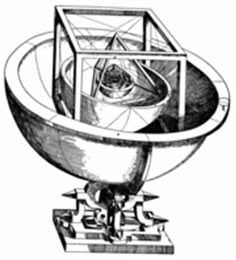 Kepler's model of the Platonic Solids system from Mysterium Cosmographicum

Eventually, after trying out many different theories, Kepler realised that the planetary orbits are not circular or spherical, but elliptical. Ellipses are closely related to circles but are elongated, and have two centres or foci , instead of one. Kepler found that if he modelled a planetary orbit with the Sun at one focus, then his predictions for the locations of planets exactly matched the data that had been observed using telescopes and measuring instruments. In fairness to previous astronomers, the orbits of some of the planets are only slightly elliptical so are almost circular. That's why earlier models of the solar system had given a fairly good approximation when predicting the positions of the planets.

In the diagram above, the red shape is a perfectly circular orbit with the Sun at the centre. The green shape is a bit like Earth's orbit - it's a slightly squashed circle, or what mathematicians call an ellipse with low "eccentricity". The blue shape shows what a very eccentric elliptical orbit looks like. An example of this in our own solar system is Pluto. As you can see the Sun is no longer in the centre, but at the left hand focus. The other focus is marked with an X, but in a planetary orbit this space would be empty.

It took all those centuries of experimenting with shapes and mathematical models to find out the true structure of the solar system. Find out how modern astronomers are using maths to understand the wider universe in Shaping the Universe III - To Infinity and Beyond .