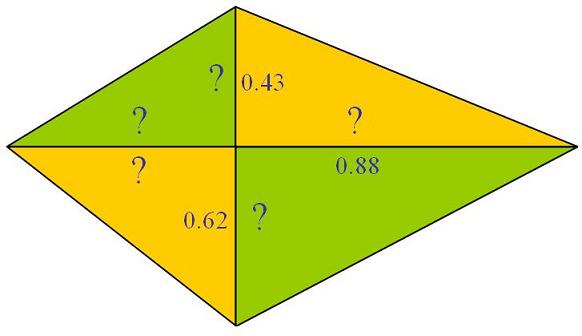 Two perpendicular lines lie across each other and the end points are joined to form a quadrilateral.

Eight ratios are defined, three are given but five need to be found.

Each original line is now in two parts and there are a further four lengths forming the quadrilateral.

Can you find the five ratios which were not given?

This problem is about ratio, you could have a big version or a small version of the diagram and it would make no difference, so why not make the size something convenient ? Why not try having the hypotenuse of the top right orange triangle as your unit - ie. make that length 1 . What will you do next ?
The NRICH Project aims to enrich the mathematical experiences of all learners. To support this aim, members of the NRICH team work in a wide range of capacities, including providing professional development for teachers wishing to embed rich mathematical tasks into everyday classroom practice.