Can you put the numbers from 1 to 15 on the circles so that no consecutive numbers lie anywhere along a continuous straight line? 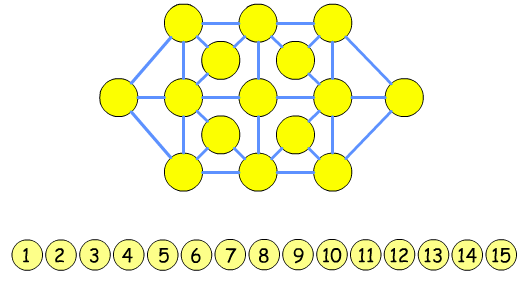 This problem is a good one for teaching what consecutive numbers are and for learning to spot them. It is fun to do as long as there are real objects, such as numbered counters, to move around or an interactivity to use.
Sound logical thinking is required but, almost inevitably, some trial and improvement will also be needed!

This photocopiable sheet might be useful, along with numbered counters. Learners can then try out their ideas, tweaking and tinkering as they go.

Which circles lie on the fewest straight lines? How might this help?
If you try putting the number 1 on one circle, where could you put the 2? Now, where could the 3 go?
Which numbers have fewer consecutive numbers than the other numbers?
If you have 12 down, for example, which numbers are consecutive to it?

Learners could be challenged to find as many different solutions they can.

Using numbered counters and the challenge sheet will help all learners access this task. Encourage the use of 'trial and improvement', emphasising that this task is not about about finding an answer quickly.