This problem follows on from Five Coins so we would recommend looking at that one first. 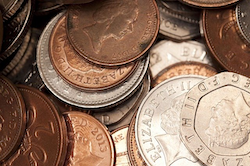 Ben has five coins in his pocket.

How much money might he have? If possible, talk to someone else about your ideas.

Dayna is trying to guess how much money Ben has. She knows that altogether he has less than £1.

Dayna starts writing down all the amounts of money less than £1 that Ben's five coins could add up to.

Could Ben have any amount of money between 5p and £1 in his pocket, or do you think there are some amounts that would be impossible for him to have?

Have a go at writing out Dayna's list of numbers, showing how Ben could make each total with five coins. If there are any numbers missing from the list, can you explain why these amounts are impossible for Ben to have?