This article has been adapted from an article of the same name published on Plus, NRICH's sister project. 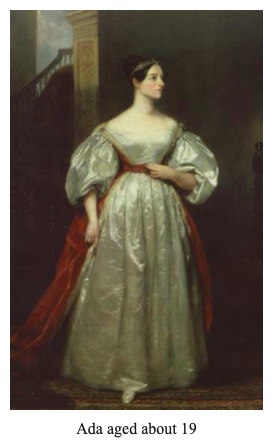 You are reading this article today thanks to computers. You could be anywhere in the world reading it on a laptop, a tablet, or a phone. And when you are tired of reading, you can switch to listening to music or watching a movie on the same device, or chatting to some of your friends online.

None of this would have been possible even just thirty years ago. But although the computer revolution is new, computers were first invented nearly 200 years ago. One of the pioneers was a female mathematician called Ada Lovelace, who created one of the first computer programs and understood the enormous potential of computers.

Ada was born in 1815, to an unconventional family. Her father was the famous poet, Lord Byron, who was described as "mad, bad and dangerous to know".  Only a month after Ada’s birth her parents separated, and Lord Byron went abroad never to see his daughter again.

Ada's mother, Anne Isabelle Milbanke, was also an unusual person. She had a passion for mathematics which led her ex-husband to once call her "the Princess of Parallelograms". So she ensured that her daughter had an excellent education in all subjects, and particularly in mathematics.

Just as it was rare at the time for a woman like Anne to have an interest in mathematics, it was unusual for her to provide such a good education, particularly a scientific one, for her daughter. At the time women weren't allowed to go to university, they couldn't vote, and married women couldn't even own a house. But, like her mother, Ada excelled in mathematics, and was encouraged by another female mathematician, Mary Somerville. When, at the age of 17, Lovelace met Charles Babbage, she found the area of work in which she would make her mark on history.

Although there were no computers as we now know them in the early 1800s, a different sort of "computer" already existed. This was a person whose job was to perform long calculations that came up in astronomy and the navigation of ships across the oceans. But the calculations were so difficult, the answers often contained mistakes. So Charles Babbage decided to create a machine, called the difference engine, to perform them automatically. The difference engine was envisaged as a mechanical machine, with brass cogs and moving pistons, to be powered by turning a crank or by steam.

During the construction of the first prototype, Charles began to think about an even more advanced machine - the analytical engine - that would be able to store data and perform sequences of instructions defined on punch cards and fed into the machine, like the Jacquard looms of the time. This would mean that the analytical engine could be programmed to perform any type of calculation and be a direct forerunner of the computers we use today.

Ada saw the prototype difference engine and was fascinated by it, and by the possibilities of the plans for Charles' analytical engine. She began to correspond with Charles and became an expert on the engines. But she held back from sharing her own work with other scientists, instead offering to translate an Italian scientist's report on one of Charles' lectures. Women at the time faced great difficulty working in science. When Charles, aware of her knowledge, asked "why she had not herself written an original paper on a subject with which she was so intimately acquainted", Ada modestly replied that the thought had not occurred to her.

Charles and Ada agreed she should add her own notes to the translation and this addition ended up being three times longer than the original work. Her Translation and extended notes (published in 1843) became the most important description of the analytical engine and how it could be used. Most famously, the "Notes" contained the first published computer program - instructions on how to calculate a certain sequence of numbers, called the Bernoulli numbers. It doesn't look much like what we now think of as computer code, but when punched into the instructions cards it wouldn't look that different from computer instructions on the punch cards used up until the 1970s.

Not only was Ada a pioneer of programming, but she saw beyond Charles' vision for calculation to other potential uses for the analytical engine. She saw that the instructions and data need not represent numbers and numerical operations, but could also represent letters, images or music - a vision of modern computers and software over a century before they came into existence.

Despite all the brilliant ideas, the analytical engine was never constructed because artisans of the time lacked the expertise to make the necessary complicated mechanical parts. The only part of the machine to become reality was the part called the mill, which, like a modern computer's CPU, carried out the numerical operations. Charles' son built it and used it to calculate up to 44 multiples of pi to 29 figures.

Sadly, Ada's health deteriorated following the publication of the "Notes" and she died of cancer in 1852, aged just 36.

It wasn't until programmable computers were first built in the 1940s that Ada's and Charles' vision came to reality. In the 1970s, when the US Department of Defense decided to create a computer language they named it Ada in her honour. The Ada language is still in use in air traffic control, in planes such as the Boeing 777, in rail transport including the TGV in France, the New York subway and London's tube, and in space missions such as Mars Express and the Beagle 2.

Ada is also still remembered every year on Ada Lovelace Day, which celebrates the achievements of women in science, technology, engineering and mathematics. Sadly, the fact that Ada was female has led some people to scrutinise her work in much more detail than they would have done had she been a man. Some have even claimed her contribution was exaggerated.  But all those who really know about Charles and Ada agree that Ada was a true pioneer who understood the potential of computers over a century before the computer revolution began.

You can find out about current female mathematicians on the Plus website.