This article was writen by Rachel Thomas and first published in Plus, an internet magazine which aims to introduce readers to the beauty and the practical applications of mathematics. Like NRICH, Plus is another part of the Millennium Mathematics Project. The original article can be found at http://pass.maths.org.uk/issue24/news/parking/ . You can keep up-to-date with the latest mathematical news from Plus by visitng their news section .

Scientist Bryan Rickett has a vision of the future - and it is one in which self-parking cars prowl the tarmac plains, hunting down suitable parking spots and manoeuvring elegantly into them.

According to Rickett, this dream come true for the parking-phobic may not be far off. He works for Roke Manor Research , a company developing a system called the Vehicle Parking Assistant , which uses a combination of radar sensors and cameras attached to a car to calculate the size and position of a parking space, determine whether it is large enough and calculate the optimum trajectory the car should follow to get into the spot. "It will say yea or nay, and then provide advice on how to park the car", Rickett told New Scientist . This is one step better than the parking aids currently available, which merely measure the distance to an obstacle and warn the driver if collision is imminent.

The Radar group at Roke originally developed systems for defence applications, but are now applying the same technology to more urban battles, such as car parking and air traffic control. The key technique, called multilateration , is the combining of information from the network of sensors distributed around the car. For example, the four sensors across the front bumper each transmit a signal in turn, the signal is reflected by any obstacles in the vicinity (called targets) and is picked up by each of the four sensors, which are both transmitters and receivers. The time it takes for the signal to travel from transmitter to receiver depends on the distance the target is from each sensor. These measurements give the Parking Assistant a system of 16 non-linear equations involving the known coordinates of the sensors and the unknown coordinates of the target. It then solves the geometry of the target position (or gives an accurate estimate) and, combining this with information from the camera images, builds up a picture of the parking space. 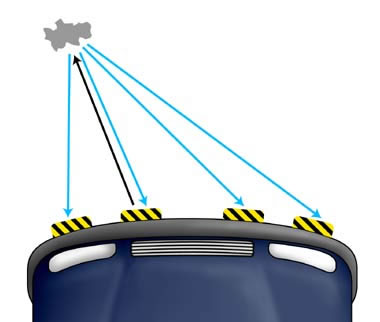 Each of the sensors takes turns to transmit a signal (the black arrow) which bounces off the target and is received by all four sensors (the blue arrows).

This is just one element of research that could one day give us self-driving cars. Already the Parking Assistant will take control of a car to stop it if an imminent collision is detected, perhaps because a pedestrian steps in the way or the driver misjudges the angle of approach. Eventually Rickett and his colleagues hope to combine it with an automatic steering system so that nothing is left to chance. The Parking Assistant has already been trialled with a real car, with promising results, and Rickett believes it will be widely available in just a few years.

The next version of cruise control - the system already installed in many cars which automatically keeps the car travelling at a constant speed - is also under development by several groups. Adaptive Cruise Control not only keeps a car at a constant speed, but also makes sure that it remains a safe distance from the car in front. Such technologies use sensors to analyse the position of the other cars in the vicinity, and calculate their relative speed using the Doppler frequency of the received signals.

The self-parking car may be a science-fiction dream come true, but New Scientist wondered what would happen if two such cars vied for the same spot. Rickett attempted to reassure them by saying that by the time self-parking cars were available, they would be able to talk to one another directly. But does this open the way to strange vehicular fights for dominance in the car parks of the future? Maybe the cars' equivalent of big antlers or loud roars will be the ability to calculate the most decimal places of pi or factorise the biggest numbers...
The NRICH Project aims to enrich the mathematical experiences of all learners. To support this aim, members of the NRICH team work in a wide range of capacities, including providing professional development for teachers wishing to embed rich mathematical tasks into everyday classroom practice.