Like many interesting shapes, circles are all around us every day. But how often do you notice them? Circles have fascinated people throughout the ages, so let's explore some of the most famous and mysterious circles in history.

Circle designs feature in the artefacts found from ancient civilisations and from more recent cultures all over the world. Prehistoric people were building stone circles 4,000 years ago, and you have probably heard of the most famous stone circle at Stonehenge in Wiltshire, England. These sites were extremely spiritual and it has also been suggested that Stonehenge was arranged as a sort of astronomical observatory so that the sun would rise in line with one of the stones on the day of the summer solstice, the longest day of the year. To learn more about Stonehenge visit English Heritage.


In Ancient Greek culture the circle was thought of as the perfect shape. Can you think why? How many lines of symmetry does a circle have, for instance? To the Greeks the circle was a symbol of the divine symmetry and balance in nature. Greek mathematicians were fascinated by the geometry of circles and explored their properties for centuries.

One type of circle that still fascinates people today is the crop circle. In recent times they have been the subject of conspiracy theories and hoax pranks, but there were reports of them in ancient times too. Nobody really knows how these complicated patterns are formed. You can find out more about crop circles at: http://en.wikipedia.org/wiki/Crop_circle .

There are many puzzles based on circles. One puzzle that the Greeks could never solve, and that no-one has ever solved since, is called 'Squaring the circle'. The challenge was to construct a square with exactly the same area as a given circle, using only a set of compasses and a straight edge. You weren't allowed to simply measure or calculate the area of the circle, you had to do it all by geometrical construction. People have been trying for centuries to solve it, but in 1882 it was proved to be mathematically impossible. For that reason, people who continued to try to solve it were considered to be chasing a dream, and the term "circle-squarer" became a well-known insult used for someone who attempted the absurdly impossible. Find out more about squaring the circle at http://mathforum.org/isaac/problems/pi3.html

Another famous circular brainteaser is the Borromean Rings puzzle. These are three interlinked rings which are inseperable from each other, but if you were to take just one of the rings away the other two would be separated also. The rings have a history to them, which is told at http://www.liv.ac.uk/~spmr02/rings/ . This old, visually perplexing problem has fascinated artists as well as mathematicians. The idea is not limited to rings. Different shapes like triangles and rectangles have been used too. Examples of this artwork are shown here : 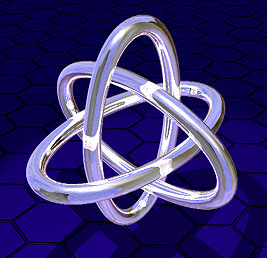 Circles are still symbolically important today -they are often used to symbolize harmony and unity. For instance, take a look at the Olympic symbol. It has five interlocking rings of different colours, which represent the five major continents of the world united together in a spirit of healthy competition.

(We can't show it for copyright reasons.)

Look around you and see how many circles you can see right now. Perhaps you have never stopped to think about them, but circles are everywhere and they really are fascinating as well as beautiful. Perhaps you'd like to experiment with making patterns and pictures out of circles, or have a go at some of the many circle problems on this site. For starters, have a look at  Overlapping Circles .