Article by Jenni Back and Trisha Lee

Children are born with an ability to make sense of the world through play and storytelling. By creating narratives, they act out concepts and ideas that confuse them or that they find fascinating. Examining the world in this way they are able to explore and relate to the variety of topics and subjects that the world throws at them.

This power of story to convey concepts and ideas to children has long been recognised by educationalists. By connecting a topic to young children through narrative we are truly able to engage their emotions, and to help them understand the power of the ideas being explored. Children are pulled in physically as they 'sit on the edges of their seats' wondering what will happen next and how a tense drama will be resolved. This is the power of a good story.

A number of writers about narrative and education have considered this. One of these is Canadian educationalist Kieran Egan (1989) who suggests that children will engage with new ideas more readily if they are presented in the form of stories which have at their heart dramatic tensions between Binary Opposites, e.g. good and bad, hope and fear, love and hate. Egan suggests that it is precisely these Binary Opposites that have the power to engage children as these are the tools they use in their everyday life. His account is mainly theoretical although he does offer some story models through his numerous publications. 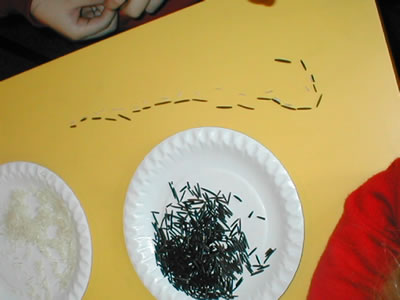 Counting grains of rice by matching

Artistic Director Trisha Lee and Arts Education Director Isla Tompsett from MakeBelieve Arts became interested in Kieran Egan's work having read "Teaching as Storytelling". They became fascinated in the idea that you could teach anything in this way, even mathematics. Something about the use of story and mathematics excited and scared them. Supposing it was possible to to enrich a subject that they had approached with trepidation? They enlisted the help of Jenni Back, the Primary Coordinator of NRICH.

With only a belief in the power of story, MakeBelieve Arts felt inspired to devise narratives to be used in primary schools that would present maths to children using this model. They felt that it was vital to their approach that they took advice from NRICH to help them present the mathematical ideas and to make suggestions about the curriculum areas that would lend themselves to this approach. Trisha, Isla and Malika Booker, a freelance poet and storyteller began to explore how story could be used to engage children in mathematics. The project was funded by 'Creating Success' an Excellence in the City Action Zone and took place in a primary school in Lewisham, London.

At the start of the project, Jenni Back worked with MakeBelieve Arts and a small group of teachers drawn from the zone who were interested in storytelling and mathematics. She worked with the group on material that is available here on the NRICH website to illustrate some stories with mathematical content and the group also looked at stories that have a mathematical component like 'The Hungry Caterpillar' by Eric Carle. In this story the mathematics is an 'add on' to the story, in the sense that the numbers are chosen in order, but they don't need to be there for the purposes of the narrative. The group looked at some of the stories in The Tangram problems found on the NRICH website, written by Lyndon Baker, which is presented as dialogue and involves children talking about mathematics and its meaning. By examining a variety of the existing story forms available around mathematics the group became aware of the lack of Binary Opposites or dramatic urgency in these models.

The afternoon was then spent in a workshop considering the Binary Opposites necessary for a good story and following the story model created by Kieran Egan. They began creating a series of narratives with mathematical ideas at their core.

In an examination of the topic of standard and non-standard measurements the group questioned what is at the core of this lesson. What is fundamentally exciting about the topic? The conclusion lay in the fact that if you measure with, for example, your hands, then a person with larger hands would measure larger quantities than a person with smaller hands. If they were providing you with cloth for a dress then one person's measurements would be much smaller than another. The binary opposite of 'fair' and 'unfair' arose out of this exploration and a story about a merchant who was taken ill and replaced by his daughter and her tiny hands was born.

The children offered a lot of positive feedback when asked about the experience three weeks later. One group remembered that they tried to find out ...
"How many children were in the class and they tried just counting them, and then the second counsellor put everyone by a rock and then they made a pile of pebbles and then had 10 pebbles each and a basket and that way it worked."
The children came up with imaginative ideas about the sort of stories that they would like to explore ...
"We could do stories where we count in 10s or 2s or 5s."
"We could have a story where we collect and count shells."
"I liked putting pebbles in the baskets and counting was best."

MakeBelieve Arts are continuing to develop this work further in consultation with Jenni Back and there are plans to expand the work to cover topics from throughout Key Stage 2 and the Foundation Stage curriculum. They are happy to send out a termly newsletter to any setting interested in their approach. Trisha Lee can be reached at MakeBelieve Arts, 4 Millmark Grove London SE14 6RQ, telephone 020 8692 8886. The e-mail address is: makebelievearts@aol.com.


This article also appears in Primary Mathematics, a journal published by The Mathematical Association