Volume of a Pyramid and a Cone

These formulae are often quoted, but rarely proved. In this article, we derive the formulae for the volumes of a square-based pyramid and a cone, using relatively simple mathematical concepts.

(The ideas used in this article are also used here to find the volume of a sphere and the, impressively named, mouhefanggai shape.)

What you need to know.

You need to be familiar with the formulae for the area of a square, the area of a circle, and the volume of a cuboid. We will also use ideas of enlargement and ratio.

When we think of a pyramid, we usually think of one where the vertex (the top point) is above the centre of the base, a right pyramid . However in this article, we will begin with a yangma. Yangma is an ancient Chinese name for a rectangular-based pyramid whose vertex is vertically above one of the vertices of the base. We will take a yangma with a square base of side length $a$, and height also length $a$. Three of these can be fitted together to form a cube.

Consider, for a moment, a cube with edges 1 unit long. You know that the volume is $1 \times 1 \times 1$. Now stretch that cube in a horizontal direction so that it measures a by 1 by 1. Its volume is now $a \times 1 \times 1$. If we imagine the cube sliced horizontally, there will be the same number of slices, but each will be a times as long.

There are three independent directions in which we could enlarge a 3D shape. If we enlarge it by a scale factor $k$ in one of these directions, the volume will be $k$ times as large.

Suppose we want the volume of a yangma whose height is different to the base lengths, perhaps height $h$ instead of a. Well, this is just an enlargement in the vertical direction.

We now have a formula for the volume of any square-based pyramid whose vertex is above one of the vertices of the base. What about if the vertex is somewhere else - the middle, for instance? What we are going to do is to imagine the pyramid cut into lots of slices horizontally. We are going to slide these slices across, so that the top of the pyramid is above the middle of the base. 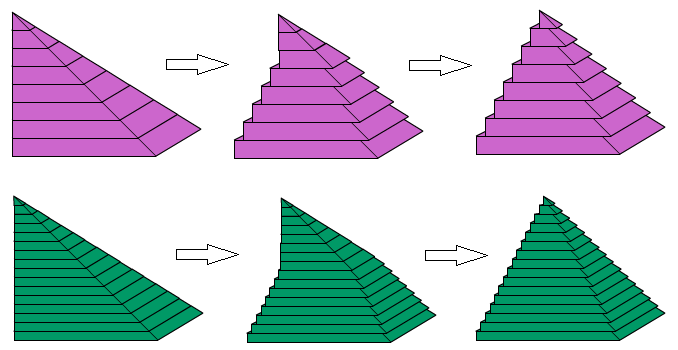 If we had an infinite number of slices, our pyramid would have nice straight edges. You can probably imagine that with more slices, it would look smoother than in this illustration. Has the area of any of the slices changed? So has the volume of the shape changed?

Comparing a cone with a pyramid

We will now look at a cone. We'll start with a right cone , whose vertex is above the centre of the base. In fact, by slicing it as in the previous section, we can show that the same formula applies for any cone.

Imagine a cone whose base is a circle radius $r$, and height is $h$. This cone will fit exactly inside a square-based pyramid with base length $2r$ and height $h$.

Suppose we take a slice of the pyramid with the cone inside, from some way up the pyramid. This will look like a square with a circle fitting inside. We don't know the radius of the cone at this point, so we'll call it $x$.

We can use the same principles to find the volume of any pyramid.

If the base of the pyramid is a triangle with base $a$ and perpendicular height $b$, it will fit exactly in the rectangular pyramid above.

Although we don't know the measurements of the rectangle in this slice, the sides will still be in the ratio $a:b$ (this may take some thinking about). Let's call them $k{a}$ and $k{b}$ (where $k$ is less than 1).

The formula for the volume of any pyramid is $\frac{1}{3}\mbox{base area} \times \mbox{height}$.
Verify that this works for the pyramids above (and indeed for the cone). Can you convince yourself that this is always true?