The sound of bells

If you wear a different coloured T-shirt every day someone may say that you are "ringing the changes". This expression simply means that you plan for variety rather than keeping things the same. It comes from the the custom of ringing church bells.


In East Anglia, as you look across the fens, villages appear almost like little islands (indeed some of them were islands before the fens were drained) and these villages are dominated by big churches with tall towers. In the past people regulated their lives and passed messages by ringing church bells, which could be heard for miles around, telling the time of day, and giving news of births, marriages and deaths in a parish. The following quotation comes from the ringer's rules from Southhill in Bedfordshire "When mirth and pleasure is on the wing we ring; at the departure of a soul we toll".

Bell ringing is good exercise for the body and mind, the bells are heavy and the bellringers have to remember the changes. Bell ringing often appeals to mathematicians because there is a lot of mathematics to be found in these complicated sequences of changes. Before reading on you might like to try this problem on bellringing.

The mathematics of the changes

The reader is invited to investigate permutations in the ringing of church bells, that is the different orders in which the bells can be rung on a ring of bells. Each bell is mounted on a wheel and controlled by a bellringer pulling on a rope. A bell rings once per revolution. Roughly speaking it rotates 360 degrees from top-dead-centre back to top-dead-centre and strikes (once) when it is about 70% of the way round. The bell rings alternately clockwise and anti-clockwise (roughly 360 degrees each way) and two revolutions constitute a so-called whole pull. Rather confusingly a whole pull (singular) consists of two pulls (plural) on the rope.

So for example, with just three bells there are six possible orders in which they can ring. Mathematically speaking there is a group of six bell ringing rows.


One way of ringing every posible row once beginning and ending with rounds is to ring the changes p then q then p then q then p and finally q again as illustrated by this braid diagram. Each line shows the order in which the bells are rung and the bellringers remember their 'parts' by remembering the shape and pattern of their strand in the braid.

A circuit diagram provides another way of illustrating these changes. Here we see the change p illustrated by a black line, and q by a blue line. Each node represents one of the six permutations. By traversing the circuit either clockwise or anticlockwise, we see two ways to ring a block denoted by ${(pq)}^3$ and ${(qp)}^3$.
With four bells there are of course many more possibilities; there are twenty four different permutations or orders in which the bells can be rung and there are four bell ringing changes.

Now look at the network diagram below which shows all 24 possible permutations in the order of the four bells. This network represents all the sequences of the changes $p$, $q$, $r$ and $s$ for four bells in much the same way as the simple hexagonal network for three bells. Any two adjacent vertices in the network represent permutations for which there is a bell ringing change between one and the other. The four changes $p$, $q$, $r$ and $s$ are shown in four different colours.

Find the vertex labelled 1234. Now follow the green edge which represents the change s from 1234 to 2143. This is the first change shown in braid diagram 2 which shows the sequence $s r s r s r s r$ or ${(sr)}^4$ which starts and ends with 1234. This is shown in the network below by the large circular loop on the bottom right hand side. As we noted before, although this loop starts and ends at the same vertex it does not visit every vertex in the network. However, by traversing the entire network, visiting each vertex once and only once and returning to the stating point, we get an extent on four bells in which each row is rung once and only once. 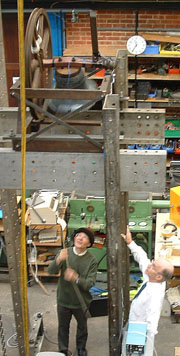 In addition to studying the mathematics of bellringing, there is an interest in investigations into the mechanics of church bell ringing as described in this news item from the Cambridge University website of 17th January 2005:
"As part of a fourth-year student project on the mechanics of church bell ringing, a "bell tower" has been built in the Mechanics Laboratory. The bell has been instrumented to provide data on the movements of bell and clapper, to compare with a theoretical model. In this picture, the bell is being rung by Dr Frank King of the Computer Laboratory, who is the official University Bellringer. He is being watched by Professor David Newland, past head of the Engineering Department and a keen bellringer. "


A computer program can be written to play this music. You might be able to borrow some hand bells, or you could try it out on any musical instrument, or you could even tune glass bottles, with different amounts of water in them, and 'ring' the bottle-bells by striking them with a teaspoon.

The next article will explain the group theory which underlies these ideas and which is represented by the network diagram.

Further information can be found in Frank King's book Ringing Elementary Minor Methods on Handbells, on the Central Council of Church Bellringers website, in John Harrison's website, the Wikepedia website and many more.