A Brief History of Time Measurement

Ever since humans first noticed the regular movement of the Sun and the stars, we have wondered about the passage of time. Prehistoric people first recorded the phases of the Moon some 30,000 years ago, and recording time has been a way by which humanity has observed the heavens and represented the progress of civilization.

The earliest natural events to be recognised were in the heavens, but during the course of the year there were many other events that indicated significant changes in the environment. Seasonal winds and rains, the flooding of rivers, the flowering of trees and plants, and the breeding cycles or migration of animals and birds, all led to natural divisions of the year, and further observation and local customs led to the recognition of the seasons.

Measuring time by the Sun, the Moon and the Stars

As the sun moves across the sky, shadows change in direction and length, so a simple sundial can measure the length of a day. It was quickly noticed that the length of the day varies at different times of the year. The reasons for this difference were not discovered until after astronomers accepted the fact that the earth travels round the sun in an elliptic orbit, and that the earth's axis is tilted at about 26 degrees. This variation from a circular orbit leads to the Equation of Time (see 'Note 2' below) which allows us to work out the difference between 'clock' time and 'sundial time'.
Another discovery was that sundials had to be specially made for different latitudes because the Sun's altitude in the sky decreases at higher latitudes, producing longer shadows than at lower latitudes. Today, artists and astronomers find many ways of creating modern sundials.

The earliest Egyptian Star Map is about 3,500 years old and shows the most unusual conjunction of the planets (Venus, Mercury, Saturn and Jupiter) in the constellation of Orion and the occurrence of a solar eclipse that happened in 1534 BCE.

From about 700 BCE the Babylonians began to develop a mathematical theory of astronomy, but the equally divided 12-constellation zodiac appears later about 500 BCE to correspond to their year of 12 months of 30 days each. Their base 60 fraction system which we still use today (degrees / hours, minutes and seconds) was much easier to calculate with than the fractions used in Egypt or Greece, and remained the main calculation tool for astronomers until after the 16th century, when decimal notation began to take over.

The earliest archaeological evidence of Chinese calendars appears about 2,000 BCE. They show a 12 month year with the occasional occurrence of a 13th month. However, traditional Chinese records suggest the origin of a calendar of 366 days depending on the movements of the Sun and the Moon as early as 3,000 BCE. Over such a long period of observation, Chinese astronomers became aware that their calendar was not accurate, and by the second century CE it was recognised that the calendar became unreliable every 300 years. This problem is called Precession and was recorded by Chinese historians in the fourth and fifth centuries CE. In the fifth century CE the scholar Zu Chongzi created the first calendar which took precession into account, and the most comprehensive calendar was the Dayan Calendar compiled in the Tang Dynasty (616-907 CE) well ahead of any such development in Europe.

In the Mediterranean, Hipparchus made the earliest calculations of precession in about 160 BCE. The problem was taken up by astronomers in the Middle East and India who recognized that precession gradually altered the length of the year. Calendars have had to be altered regularly. In 325 CE the spring (vernal) equinox had moved to March 21. The Emperor Constantine established dates for the Christian holidays, but Easter is based on the date of the vernal equinox which varies every year because the equinox is an astronomical event. By 1582 the vernal equinox had moved another ten days and Pope Gregory established a new calendar, and this change is the reason for having an extra day in every leap year. However, there are still small changes accumulating, and one day we shall have to adopt a new calendar!

Inventions for measuring and regulating time

The early inventions were made to divide the day or the night into different periods in order to regulate work or ritual, so the lengths of the time periods varied greatly from place to place and from one culture to another.

The Division of the Day and the Length of the 'Hour'

An Egyptian sundial from about 1,500 BCE is the earliest evidence of the division of the day into equal parts, but the sundial was no use at night. The passage of time was extremely important for astronomers and priests who were responsible for determining the exact hour for the daily rituals and for the important religious festivals, so a water clock was invented. 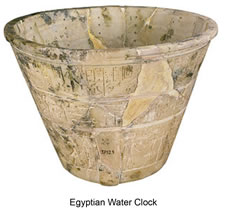 There are various theories about how the 24 hour day developed. The fact that the day was divided into 12 hours might be because 12 is a factor of 60, and both the Babylonian and Egyptian civilisations recognised a zodiac cycle of 12 constellations. On the other hand, (excuse the pun) finger-counting with base 12 was a possibility. The fingers each have 3 joints, and so counting on the joints gives one 'full hand' of 12.

In classical Greek and Roman times they used twelve hours from sunrise to sunset; but since summer days and winter nights are longer than winter days and summer nights, the lengths of the hours varied throughout the year.

In about 50 BCE Andronikos of Kyrrhestes, built the Tower of Winds in Athens. This was a water clock combined with Sundials positioned in the eight principal wind directions. By then it was the most accurate device built for keeping time. 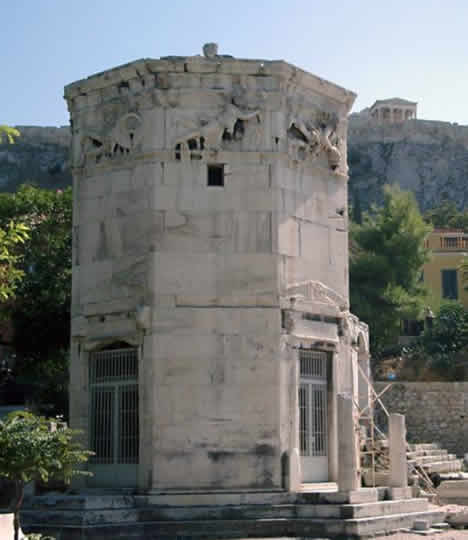 The Tower of the Winds in Athens contained a clepsydra and shows the North-East, North and North-West deities in this picture

Hours did not have a fixed length until the Greeks decided they needed such a system for theoretical calculations. Hipparchus proposed dividing the day equally into 24 hours which came to be known as equinoctial hours. They are based on 12 hours of daylight and 12 hours of darkness on the days of the Equinoxes. However, ordinary people continued to use seasonally varying hours for a long time. Only with the advent of mechanical clocks in Europe in the 14th Century, did the system we use today become commonly accepted.

Mechanical clocks replaced the old water clocks, and the first clock escapement mechanism appears to have been invented in 1275. The first drawing of an escapement was given by Jacopo di Dondi in 1364. In the early-to-mid-14th century, large mechanical clocks began to appear in the towers of several cities. There is no evidence or record of the working models of these public clocks that were weight-driven. All had the same basic problem: the period of oscillation of the mechanism depended heavily on the driving force of the weights and the friction in the drive.

In later Mediaeval times elaborate clocks were built in public places. This is the Astronomical clock in Prague, parts of which date from about 1410.

The earliest surviving spring driven clock can be found in the science museum in London and dates from about 1450. Replacing the heavy drive weights with a spring permitted smaller and portable clocks and watches.

N.B. Pedagogical notes related to measurement and time can be found by clicking on the " Notes " tab at the top of this article.

When you think about the problem - we can find due South easily from the sun at midday. Looking at the night sky, we eventually deduce that there is a fixed point in the heavens around which all the stars rotate once every day (24 hours). This is where we find the 'Pole Star' (from the Great Bear or Ursa Major, measure the distance of about four lengths of the two stars at the end, 'the pointers' to find Polaris). This is the Celestial Pole - which was different for the Egyptians from today because of the phenomenon of Precession.

'Sun time' and 'clock time' are different. Sun time is based on the fact that the sun reaches its highest point (the meridian), in the middle of the day, and on the next day at its highest point, it will have completed a full cycle. However, the time between the sun reaching successive meridians is often different from clock time. According to clock time, from May to August, the day is close to 24 hours, but in late October the days are about 15 minutes shorter, while in mid February the days are about 14 minutes longer. For our daily routines, it is important to have a constant 'clock time' of 24 hours. This variation is called the 'Equation of Time' and shows the relationship between sun time and clock time. The variation has two causes; the plane of the Earth's equator is inclined to the Earth's orbit around the Sun, and the orbit of the Earth around the sun is an ellipse and not a circle. The National Maritime Museum website shows two separate graphs for these causes, and a third graph where they are combined to give the full correction.

This site gives very good examples of the development of time measurement with pictures and brief explanations http://www.britannica.com/clockworks/main.html

Make your own sundial at http://www.bbc.co.uk/norfolk/kids/summer_activities/make_sundial.shtml

Sundials on the internet has many examples from all over the world http://www.sundials.co.uk/

Precession of the Equinoxes explains the way the Earth's rotation changes. This site has a good explanation and a useful animation: http://en.wikipedia.org/wiki/Precession


For Galileo, Huygens and Harrison go to the MacTutor website:
http://www-history.mcs.st-and.ac.uk/history/

Jackie Carson wrote in to us to recommend this article too:
http://www.timecenter.com/articles/when-time-began-the-history-and-science-of-sundials/


Here is a PDF version of this article.