Coins on a Plate

Points A, B and C are the centres of three circles, each one of which touches the other two. Prove that the perimeter of the triangle ABC is equal to the diameter of the largest circle.

Not So Little X

Two circles are enclosed by a rectangle 12 units by x units. The distance between the centres of the two circles is x/3 units. How big is x?

Samantha and Shummus both realised that in order to create a triangle with a right angle, the band had to go through the centre of the circle. Shummus writes:

I noticed that the bands had to be started in the centre.

Rachel from Newstead sent us a few diagrams to illustrate examples of right-angled triangles in circles with an even number of points. 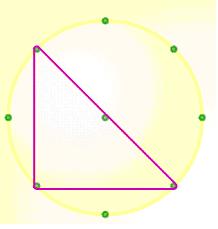 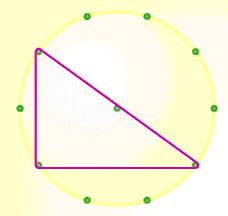 Indika of Helena Romanes 6th Form College sent us her explanation for why the band must go through the centre of the circle:


The only way that a right angle triangle can be created between 3 points round the edge is when the angle subtended at the centre by two of the points is 180 degrees, this therefore proves that two of the points have to be opposite each other (this means having an equal number of pegs).

If you haven't met this idea before, you may want to look at another problem from August 2005, Subtended angles

Here are another couple of examples of right-angled triangles using the same eight-point and ten-point circles that Rachel used: